What is digital transformation?

These technologies are already defining new ones customer relations, new growth scenarios, radical deficiency improvements. Technologies are the element facilitator of this process of change, but the value of the Digital transformation is taking advantage of the new models of thought, and ultimately the new business models.

Digital transformation is not about about technology, it’s about strategy and new ways of thinking

The strategies of digital transformation must address the
following 4 pillars.

Let's get to work together Internet of Things
A network of vehicle devices, devices, equipped with sensors, software, connectivity and computing power, with the ability to collect, exchange and act without human intervention.
Industrial production. Home automation
Robotics
Machines with sensitivity, control and intelligence in order to automate, increase or assist human activities.
Industrial production.
3-D printing
Production of three-dimensional objects through the successive stratification of materials, such as plastic, metal, glass, wood, etc.
Industrial production. Domestic production.
Artificial Intelligence
Development of programs that have the ability to learn, understand, think, plan and act on the basis of large amounts of information.
Tumor detection based on imaging. Determine damages in accidents in the insurance sector.
Augmented Reality
Overlaying digital visual or auditory information about the physical world to increase worldview.
Glasses to help prepare orders in stores. Assembly of planes, cars, machines. Repair of electrical systems.
Virtual Reality
Computer-generated 3D simulation where the user interacts with the virtual world in a realistic way.
Games and entertainment industries. Training and simulation of risk situations.
Drones
Unmanned aerial vehicles, reusable, capable of maintaining autonomous, controlled and sustained flight.
Surveillance. Inspection. Sport. Movie theater. E-commerce deliveries.
Blockchain
Digitally distributed database that uses algorithms to save and confirm transactions with great reliability and autonomy.
Security in banking operations. Validation of e-commerce operations.
Focus on the technologies and capabilities that can provide the most value:
Focus on capturing short-term value and building a long-term vision:

Let's get to work together

The seductive power of technology, especially when technology experts meet, is a danger in setting implementation priorities.
Companies must take special care with some risks associated with the implementation of new technologies:
The approach of some leading companies to prioritize the solutions to be implemented is to make a formal and rigorous review of the current operating model and to define ambitious initiatives that allow to reach the maximum potential performance: 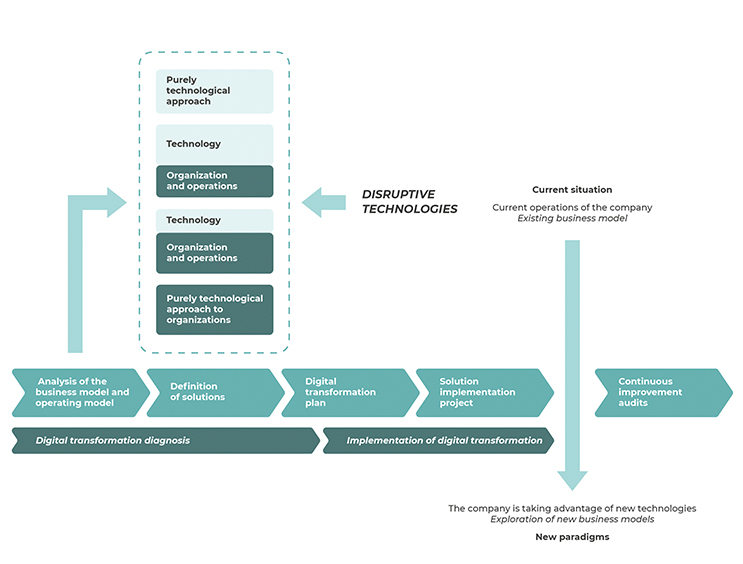 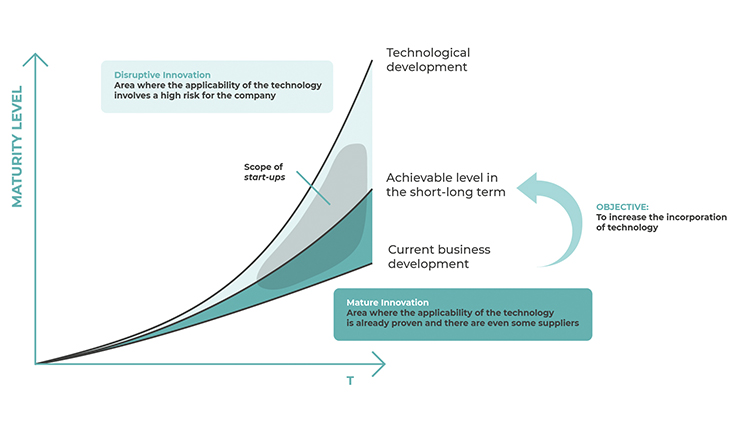 DOT Consulting manages to increase the value of companies thanks to the incorporation of the technologies that best fit each business model and the effective implementation of change.
We identify and enhance operations where more value is generated for customers, and optimize other operations.
We generate new opportunities on the new technologies available, based on the current business model.
We guarantee the correct implementation of the projects, adapting them to the current business model and managing the adaptation of the people.

The focus is on business transformation, not technology